On July 22, the Bangarang team was involved the community’s response to a stranded killer whale in the study area. After a successful rescue, our partners at Cetacealab wrote up the story for their blog. In the days that followed, the story spread to news outlets around the world. Here are a few versions of the story:

The exact details of these incidents and the decisions of responders are of value for better response to future strandings, so I also wrote a thorough account of the events of July 22nd. This account is also available in the Season 3 Leg 3 report.

The Bangarang  crew had just started transect work southbound in north Squally in the area of Union Pass. Emily saw the group of killer whales at approx. 07:30 traveling north along the Pitt Island shore from the area of Twartz Bay. Our first estimate was 11 animals, a leading subgroup of 5 followed by a subgroup of 6. We saw each group surface twice before a dive. They were moving quickly, so we set a course to intercept the leading group while I deployed the towed hydrophone array.

When the leading group surfaced again they were much further ahead than anticipated; they may have sped up during their dive. They were now along the eastern shore of Hinton Island, the large island at the entrance to Union Pass. We never saw the trailing group surface again – they may have traveled to the west of Hinton or they may have turned east toward Blossom Point on Farrant Island (a group of 6+ killer whales was seen in that area later in the day).

Even at maximum RPM (a whopping 6.5 knots, but we were against an ebbing tide) we could not catch up to the leading group. They surfaced only twice before another dive, at which point they were approx. 500m south of Edward Islets. We had checked out these islets the week before and had counted approximately 30 harbour seals hauled out and among the kelp between the two islets.

When the 5 whales of the leading group surfaced again, they were between the two islets. At a distance we saw some splash and spray, but could not tell whether these were successful chases. By the time we reached the islets the whales were circling the larger northern islet. Realizing that we would have to navigate shallows in order to get IDs, I regretted deploying the array. On the western side of the islet we stalled to bring in the array (we had heard no vocalizations up to this point) then moved around to the eastern side, where we found the whales pacing the shoreline and noticed that one was stationary very near dry rocks.

The whale, which we later named Black Bean, was nearly fully submerged except for its dorsal finn and the trace of its anterior back. It was tucked between the islet and a boulder that was drying as the tide fell. We were surprised to see her so close to the rocks, but she did not appear to be in distress or trouble.

We assumed it was a hunting tactic, an ambush for fleeing harbour seals. The other four whales were circling the islet. On two occasions we saw a pair of whales rush from the gap between the two islets around to the area where Black Bean was poised. The pair would rush past Black Bean then take a sharp turn right towards Black Bean’s mouth. This aligned with our guess that Black Bean was among the rocks intentionally. Other than these two rushes, we did not see the other animals pay any special attention to Black Bean as they paced the shoreline.

We drifted back and forth for the next half hour, collecting IDs as we could. Occasionally Black Bean would adjust its weight, but its breathing seemed relaxed. We could hear no vocalizations out of the water. We grew concerned when the right eye patch became exposed by the falling tide. Soon after this we began to see others in the group linger around Black Bean as they circled the islet. We began considering the possibility that this was a stranding, but did not act until we saw Black Bean raise its tail out of the water.

I attempted to contact Whale Point, Hartley Bay and the Gitga’at Guardians over VHF but may have been out of range. As I was coordinating a relay to Whale Point with Prince Rupert Coast Guard, we saw Black Bean pump its tail intermittently and began to hear it vocalize.

The Coast Guard confirmed that both Whale Point and the Sofia  had received the message and that the Sofia was en route. Marven Robinson of the GWs heard my conversation with the Coast Guard and let us know he was on the way. We decided not to act further until the others arrived, so we anchored on the northwest slope of the islet. We deployed a hydrophone over the side but heard no vocalizations. A light drizzle persisted during this wait, keeping Black Bean wet. The other four whales were now paying much more attention to their stranded companion. They lingered close by until the other boats arrived. We pulled the hydrophone back up when Marven and company arrived in the Gitga’at Guardian  and rafted up to us. Minutes later the Soa  arrived. By this time Black Bean was almost completely out of the water.

The group assessed the situation, Hermann consulted with Paul Catrell and a course of action was decided upon: we would assess injury and keep the whale wet and cold until the higher high tide at 18:00, at which point the whale should be able to swim away without struggle. 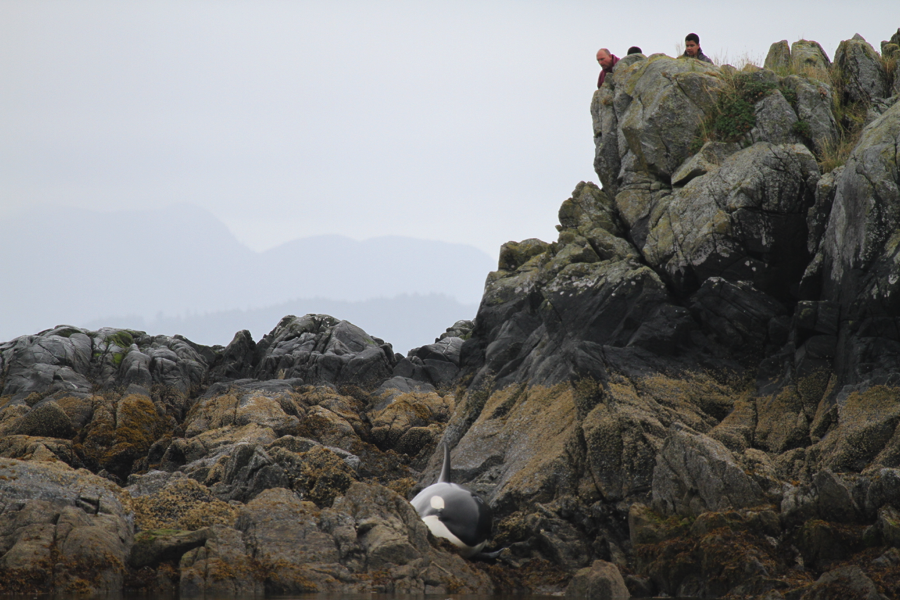 Hermann and Janie can provide a much better account of the remainder of the day. In summary, a small group landed on the islet with blankets, bed sheets and buckets. Injury to the animal seemed minor – abrasions on pectorals and flukes, and the left pectoral was pinned against the rocks at an unnatural and possibly injurious angle. Hermann, Janie, George, Marven, Nicole, Bunker, and Eric were a part of the response team. The sheet were laid over Black Bean and kept wet via buckets and a hand-powered water pump and hose system. This work was kept up all day (about 6 hours) until the tide rose again to the whale’s waterline. Crew aboard the Bangarang and Sofia made black bean burritos for the responders, hence the whale’s nickname.

As the rising tide reached Black Bean’s flanks, a group of Hartley Bay school children arrived on scene with Cam Hill to witness the stranding’s resolution. Eric returned to the Bangarang to deploy a hydrophone. Black Bean freed itself at about 16:30. The compiled recording’s first four minutes are excerpts of the whale’s vocalizations just before it was freed. The whale freed itself at 04:03 in the recording and continued to vocalize in the area for several more minutes. At 06:00 you can hear our cheers after Black Bean was re-sighted well away from the rocks. 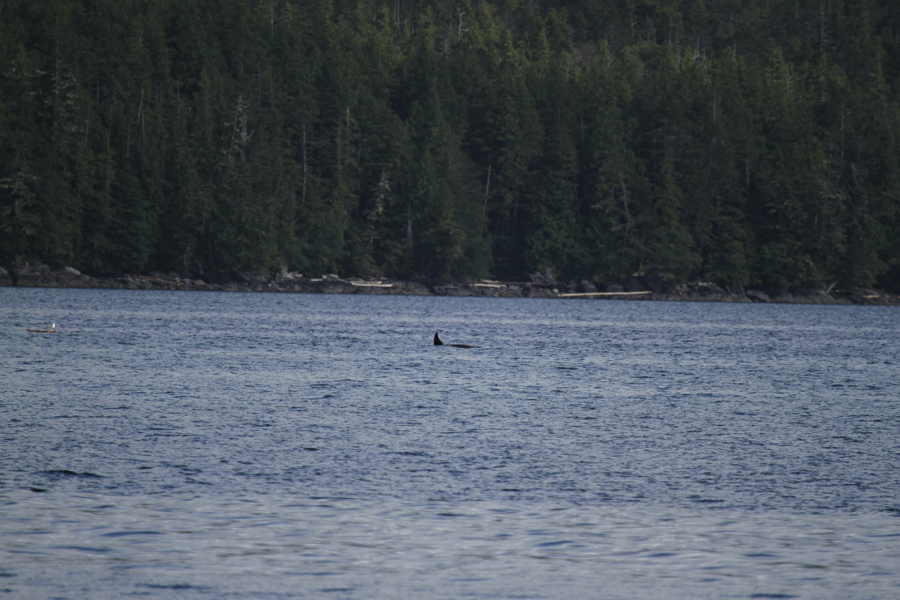 We on the Bangarang felt so lucky to witness the teamwork among Cetacealab, the Gitga’at Guardians, the Hartley Bay community, and the DFO Cetacean Research Program. We were honored to be involved.